It tastes better, when you starve for it – Simran, IIMC, Class of 2023

Let everything happen to you, Beauty and Terror
Just keep going, no feeling is final

2017
On a friend’s suggestion, I wrote an aptitude test by Career Launcher. I scored decent and got a scholarship. Without 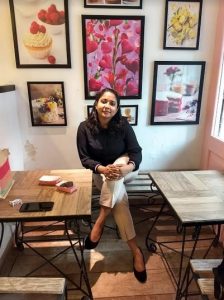 giving it much thought, I joined CL Kanpur. I met Niraj Prasad Sir there. He taught Quant and LRDI. But more than that, he taught a way of life. I remember once in class I could not answer a simple question. Niraj sir remarked, “Simran, your problem is not that you do not have talent but that you do not push enough. You see the competition
around you. You easily win here and you think you are good. But look outside and you will know how it is actually.” I have always heard words of appreciation from my parents and teachers since I was good at academics. This was something new and harsh for me. I came back to the hostel and thought about it for days. Every word of Niraj Sir made sense to me. Nothing drastic happened that day. Not like how they show it in movies. But something changed within. A seed was sown whose fruits bore after a long time passed by.

July 2018
I was on cloud nine till I got my PPO results. To my shock, I was not selected even after I put my heart and soul into that internship. I was shattered. I nearly broke down that day. On 15th August 2018, I decided that I will write CAT. I gave around 10 mocks. Every mock told me I was bad at DILR. I solved a lot of sets. But somehow, I could not become better at it.

CAT 2018: 96.43 percentile overall, 74.xx LRDI sectional. Not a single IIM called. I just had one call: MDI Gurgaon. I gave an interview there. I was waitlisted at 300-400. In the spot counselling, I got a call for their HR program. Since I was not interested in the HR domain and had a job offer, I decided to join a full-time job.

Aug 2019
On joining day, everyone looked happy except me. Something was missing. This time, I was not happy being mediocre. This time, I knew I was not going to settle until I make it to a top B-school. I tried to prepare for CAT again. But my health affected my daily routine so much that I even struggled to attend the office daily.

CAT 2019: 93.xx percentile
I knew I have not been able to study. But even then, 93 was not something I expected. I got a reality check that day. If I do not study seriously now, my B-school dream will only remain a dream.

March 2020: Pandemic as an opportunity
As I was leaving my flat in Bombay, I packed 2 sets of clothes, GMAT Official Guide and CL modules. Looking back, I can say that neither was I so determined nor so desperate for anything else as much as I was for Joka (IIM Calcutta).

Here is my scribbling from my prep days: 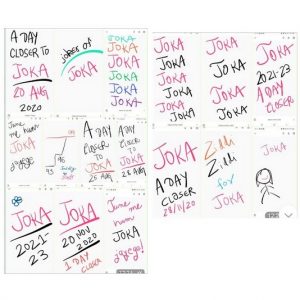 I don’t have an exact count of how many mocks I gave. I didn’t even have a fixed study schedule. I gave my best day in and out. I solved Arun Sharma books for DILR, Norman Lewis Word power made easy, previous year CAT papers, scrabbler’s blog, and whatnot. But even after all this prep, in the last leg of the race, I was not scoring well in DILR. I scored even less than 85 percentile in few mocks in the last month. I was worried about this section. 40 mins section looked even more dreadful.

I enrolled in CL PDP program. Sreeni sir took my first mock PI. I could answer only a few
questions. But when I could not answer ethical dilemma questions related to the firm I work
for, I lost my calm. I felt like a complete idiot. I made an exhaustive list of things I had to
work on with the help of my mentor. I check boxed every single thing on that list.

In my IIM-Calcutta interview, one of the panelists pushed me in the same direction of ethical
dilemmas. I was lucky in a way that I had already faced a similar situation in mock PI and
this time I did not lose my calm until the end.

IIM Calcutta results came on 18th May. Finally, I made it to Joka.

As a final note to all the B-school aspirants reading this:

“It tastes better when you starve for it.”